We have a beautiful puppy called Millie. She is a cross between a Cavalier King Charles Spaniel and a Toy Poodle; more commonly known these days as a Cavapoo, (although I always feel a bit pretentious saying that). She was born on 17th August 2018 and is a very hyperactive puppy. I chose the Dogs Trust for her 5 week training course and it was there we were introduced to snuffle mats. I believe the staff and/or volunteers make these for the rescue dogs, so if anyone has spare fleece they can donate it’s worth giving them a call. Millie absolutely loved hers and took time to snuffle out her treats (small cubes of cheese) instead of trying to bounce over to everyone else! (it was getting a little embarrassing lol).

If anyone visits us at home Millie just gets very excited to see them and won’t leave them alone (we are still working on that) and we are finding that we can distract her better by using a snuffle mat. It’s an enrichment toy and keeps her physically and mentally stimulated even when we don’t have visitors.

The idea is to hide treats among the fleece strips and your dog can sniff out the food/treats. It’s good for fast feeders too. Anyone with a rescue dog, who has had to fight for their food in the past, knows that it never actually leaves them so this mat slows the feeding up as you can use it for feeding too (dry food only obviously).

YOUR DOG MUST ALWAYS BE SUPERVISED WHEN USING THE MAT SO THAT THEY DON’T START EATING THE FLEECE.

With puppies you might need to wait until the chewing stage is over. 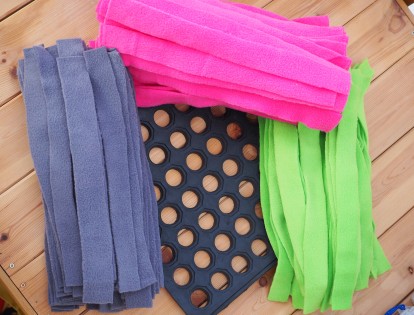 To begin with you need an anti-fatigue mat with holes. I used the Easimat Interlocking rubber mat with holes and I cut and trimmed it to make 9 mats measuring 12″x12″ (well actually my husband Darren thought I looked very dangerous with the knife and so he did it for me!).

I plan to make more but if you only need one then you should be able to pick one mat up easily at your local hardware store.

I researched carefully about the measurement of the strips of fleece, but after making the first one too wide and dense for the treats (I couldn’t hide them very easily and Millie found them too quickly), I decided on 1″ wide by 11″ long, but this doesn’t agree with how I have seen others make them, so I guess you need to make your own decision on that. Either way your dog will love it! With the pattern, I decided to do predominantly pink. For the 64 holes I needed 210 strips of fleece. I used 56 each in grey and lime green and 98 strips in pink. It’s a lot of cutting and I wanted mine to be straight so I trimmed them to tidy them up. I’m a bit of a perfectionist! 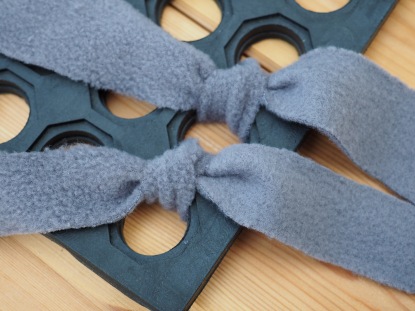 First; Push a strip of fleece through the first two holes and tie your fleece in a single knot. Push the next strip of fleece through the second and third holes and continue this across the row. Then do one more row the same. I kept mine all with the top (fluffy) side down so that the underside of the mat was all the same. The top will show all sides so that doesn’t matter.

Next add the next colour the other way so that you are forming a square pattern. Just do those 2 rows to start with as it makes it easier to work the pattern as you add more fleece.

Then add your diagonal strips. I found it easier putting the first lot of strips in a cross shape to keep them out-of-the-way but I might be being a bit too fussy! Again, just use single knots. Do this across the row and then add one more row (starting with the first colour (grey) and once that row is done continue, one row at a time, until its completed.

Check the back as you go. Keep it nice and neat as one of the first thing people do when looking at something is turn it upside down and look at the bottom! (it’s true lol).

Now for the fun to begin! Sprinkle a few treats on top of the mat so that your dog gets used to the idea. Gradually start with the hiding. For Millie it took no time at all to get used to the idea and now she snuffles away to her heart’s content. I use small cubes of cheese and small pieces of chopped up cocktail sausage mainly but any treat that your dog is used to will be fine.

I am now looking at other enrichment toys as she loves this one so much!

View all posts by karen